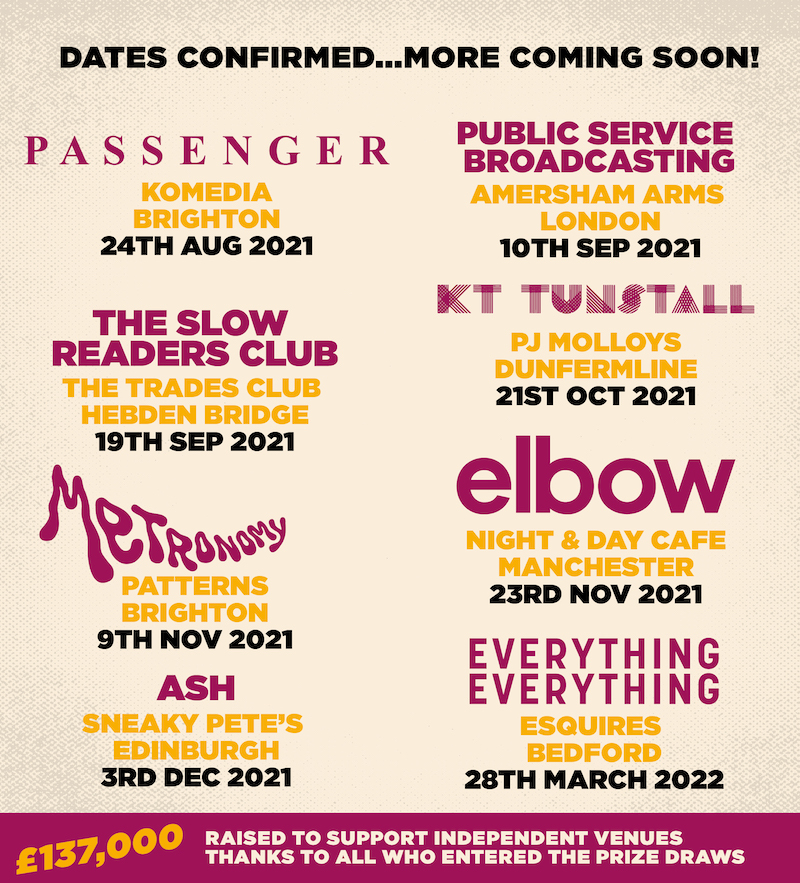 Passport: Back to Our Roots is a nationwide series of one-off intimate gigs by the UK’s biggest artists, supporting the independent grassroots venues that form the foundations of the UK’s live music scene.

Passport: Back to Our Roots announce dates for special shows by Public Service Broadcasting, Passenger, Elbow, KT Tunstall, Metronomy, Slow Readers Club, Ash and Everything Everything. More show dates to be announced soon.

Launched last August, Passport: Back to Our Roots is a nationwide series of one-off intimate gigs by the UK’s biggest artists, supporting the independent grassroots venues that form the foundations of the country’s live music scene. For a minimum donation to the campaign, music fans were entered into a prize draw to win entry to the show of their choice for themselves and a guest, to be held on dates to be confirmed when no social distancing was required.

With proceeds going towards both the individual venues and Music Venue Trust’s #SaveOurVenues campaign, Passport: Back to Our Roots raised almost £140k to safeguard the futures of grassroots music venues struggling to survive the COVID-19 crisis. Now, as Music Venue Trust looks towards to the future and its #ReviveLive campaign, the first shows to be scheduled are:

A full list of winners from previous rounds is available on request – please email info@bandonthewall.org.

About Passport: Back to Our Roots

This is your chance to watch the biggest artists play their smallest gigs – live and in person like they should be – while making a huge difference to the UK’s crisis-stricken grassroots music venues, who need urgent help due to COVID-19 closures.

The gigs will be happening as soon as real shows can happen safely – these are not socially distanced experiences. Fundraising campaigns for each event were open for two weeks, and at the end of each campaign, all proceeds go to support venues in need, right now.

How Does it Work?

Major artists support the venues that provide a crucial platform as the first rung on the UK’s world-renowned touring circuit, championing the fundraising campaigns and pledging to ‘return to their roots’ by playing a show at their chosen grassroots venue at a point in the future when ‘normal service’ can resume for live music.

These shows are not live-streamed from an empty room or held under ‘social distancing’ conditions.

Rather, they are a celebration of the unrivalled experience of watching your favourite artist in a room full of friends and fellow fans – as it should be.

This means that when announced, all gigs are ‘date TBC’. They will happen when it’s safe for gigs to happen properly, as soon as we can. We know this seems a long time to wait. But we need to raise funds right now, to help the grassroots music venues we all love.

How can I buy a ticket?

The first rule of Passport: Back to Our Roots is…THERE ARE NO TICKETS. We’re asking you to support your favourite venues by making a £5 minimum donation to the campaign, via our Crowdfunder page.

Everyone who donated was entered into a prize draw to win entry for themselves and a friend. No tickets means NO TOUTS! Winners will need to bring photo ID – such as their passport – in order to gain entry.

How can I donate? (Entries now closed)

Gigs will be announced in blocks. Visit our Crowdfunder page to see more.

Can I donate without entering the prize draw?

Yes! Simply select ‘I don’t want to enter the prize draw’ when you make your donation.

Can I enter the prize draw without making a donation?

Yes, you can enter for free by post. Details will be announced before the campaign opens.

Passport: Back to Our Roots is produced by registered charity and independent grassroots venue Band on the Wall, the Music Venue Trust and Stephen Budd Music (creator of War Child’s Passport: Back to the Bars & Passport: To BRITs Week series).